I’ve seen a Beam Ray machine running before in another healer’s place. These Beam Ray machines are a 21st century reconstruction of the lost technology of Raymond Royal Rife with his rife machine frequency generators using vacuum tubes in the mid 20th century. This was the first time for me to personally get treatment using a Beam Ray machine. I suspect I have pockets of infections in my lower left jaw bone where a wisdom tooth and a root canalled tooth were extracted. 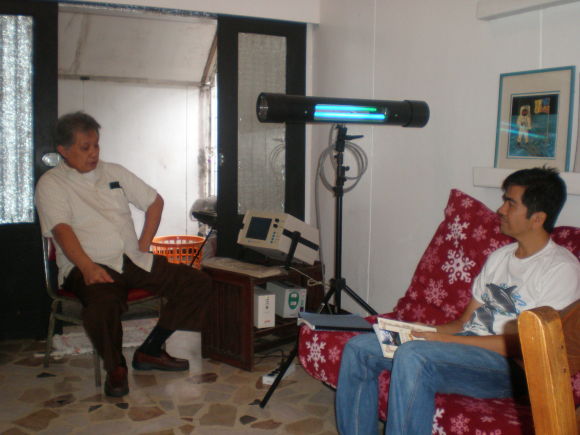 Romy Macapagal at left, the beam ray machine in the middle treating me

Last Monday morning I was unhappy to feel some pain in my lower left jaw. Did I have tooth decay? It did not feel like tooth decay. The pain seemed to be in the jaw bone. It was dull and on and off and finally off. That’s not fine with me, pain is a signal there is something wrong and I had better address it. In that lower left jaw used to be a wisdom tooth that was removed as part of a promotion when a dental surgeon removed an extra tooth growing under my tongue. Also in that lower left jaw used to be a molar I had agreed to have a root canal on by a regular dentist. When I found out how bad root canals can be, I had a biological dentist remove that root canalled tooth. And in that left lower jaw, there are odd times I would feel a spark, an electrical prick if I happen to be in a wrong position from time to time.

I have a plan that may just address my suspected problem. I was going to go to the Biological dentist Dr. Gaba as my wife and my brother have good experience with him. But before going to him, I might as well address any possible infections beforehand by having a beam ray treatment with Mr. Romy Macapagal. I have a zapper, but I don’t think that will go deep enough to the bone and to the pockets where the blood vessels do not reach. So I’m thinking Beam Ray aka Rife Machine aka frequency generator was the way to go as it should be powerful enough to go straight through your body, no need to remove clothes.

So last Tuesday I made arrangements by cell phone SMS with Romy and Wednesday afternoon at 2pm I was there at his place. Very simple house in Magallanes Village, Makati.

Mr. Romy Macapagal is a very knowledgeable man and a joy to chat with. Good thing it was a slow day that day and I had his full attention. He has the same passion for healing as I did. His focus was using the Beam Ray, Colored Lights and he could see at a slightly shifted spectrum. With the Beam Ray, he is much in demand by several MDs who integrate his Beam Ray treatments as part of their parasite and germ fighting protocols for their patients. On the side of the germ theory, these Beam Ray machines are the ultimate tool these days.

How my treatment went. Mr. Romy first put the computerized Beam Ray machine in diagnostic mode. It runs through several pre-programmed frequencies while Romy watches out for patient reactions. A reaction is something like a slight itch. If the patient reacts, he looks up the guide book and sees the corresponding frequency and the possible pathogens that need addressing. After compiling the list of possible nasty pathogens in me, Mr. Romy programs the Beam Ray machine in killing mode and off it blasts on, did me for 3 hours. I arrived at 2pm and was done around 6:30pm.

Upon getting home I ate my raw beef for dinner, took a bath, and drank my avocado leaves tea before bed to help cleanse my kidneys. Mr. Romy says the dead pathogens will have to be carted off to the liver and to the kidneys for disposal in urine and in poop. This morning and this afternoon I’ve been pooping and pooping just as he predicted I would. I didn’t feel ill, but I do feel a bit tired today like he said I would.

What did I think of the Beam Ray? It may be safe enough for my kids. I’m battling primary complex aka tuberculosis on my 8 year old boy. I’m thinking it may be a good idea to hit his problem both ways. My boy is getting nutrition, cleansing, and maybe he may need this germ killing machine… it’s a lot safer than the usual anti-biotic drugs they usually give for tuberculosis… I will do more research on this.

Hulda Clark says many diseases have a parasite and tag along germs component. Use wisely. Hopefully, this computerized Beam Ray machine is truly selective in killing only the bad germs and not the good ones we need.

I’m a pragmatist. I believe that terrain is the ultimate determinant of the health of a person, but the animal parasites are something else when they misbehave, you just need to kick them out. In my case, if I had a biological dentist clean my jaw pockets immediately, I would not have had to go through this. Maybe I did not need to have had those wisdom teeth removed after all.