Saturday evening.  It was finally brought to my attention that our 26 year old maid was down and out and sick.  Her symptoms were fever, chills, vomiting when she ate and she had a bad headache.  Tut tut, not to worry, we can get to the bottom of this with a few simple questions.

1. When did you last poop?  She last pooped Friday morning.

2. When did your problems begin?  Friday evening.

3. What did you eat for lunch? She was at a party and they were serving lots of junk food.  She admitted to eating “spaghetti” and “japanese crackers”.

4. Did you not poop the whole of Saturday yet?  Not yet.

Are you following the logic of my questions?  This seems to be a case of food poisoning, or just plain human reaction to toxic “food”.  She ate “spaghetti”… a poor excuse for a “food”.  And “japanese crackers”… another manufactured “food.”

What is spaghetti?  Spaghetti is cheap manufactured food marketed as “fun” and “for children” and very popular… popular because it is CHEAP… people want to save money, bring some “bulky food” and CHEAP… basically, spaghetti is just CHEAP. 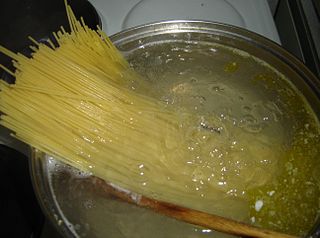 Spaghetti placed into a pot of boiling water during cooking.

Spaghetti is in this case was pasta spaghetti shaped noodles made from some cheap GMO wheat plant made in some factory farm.  This GMO wheat is processed in various stages until it comes out as dry stiff “noodles” and packaged in plastic to be sold in supermarkets.  People then buy the dried noodles and think they are “cooking” something by placing these dry noodles in a pot of water.  And in a few minutes ta daah… rehydrated wheat noodles… spaghetti.

The condiments: Canned or carton GMO “tomato sauce”.  From GMO tomatoes extensively sprayed and stocked and industrially washed and factory manufactured and flavored with artificial flavors and food coloring to get that industrially manufactured flavor marketers agree on as “spaghetti sauce” flavor.

How about the Japanese crackers?  Crackers made from what?  Fried in what?  Spiced and flavored in what? In plastic with nice illustrations?  For how long has it been there?

And this monstrous combination of junk is what our maid ate Friday lunch.  You’d have to see yourself as a garbage can to eat that kind of junk.  Or be truly ignorant and dismissive of what I teach because the dumb repetitive TV commercials had out marketed me.  So she must crave and look forward to parties because she gets to eat JUNK FOOD!  Hooray for junk food!  Cheap garbage junk food!

And she got what was obviously coming to her.

How do I know that these 2 junk foods were the culprit?  It lies with the single treatment I proposed and gave:

This is pure and simple food poisoning from obvious JUNK FOOD!  Junk food is poison!  The spaghetti and the japanese crackers had stuck in her guts… and could not get out by herself, she needed herbal assistance.  The spaghetti and japanese crackers were poisoning her blood.  This is why her body had resorted to fever, and chills, and she got a bad headache.  And the vomiting was self defense, her body couldn’t take any new “food” as it was concentrating on this current troubling food poisoning.  But for some reason, the wheat that turned into sticky paste was stuck in her guts and could not get out.

Of course the powerful colon cleanser did its job and she pooped the poisons out after a few short hours.

By very early morning Sunday, our 26 year old maid pooped her junk food troubles away.  And that was it.  Finished, cured.  As simple as that.  No complicated remedies.

I truly hope she learned her lesson.