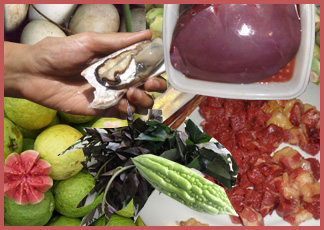 I am publicly answering this Q&A regarding the Paleo Diet asked by a student in the rawpaleodietforum.com and cavemanforum.com. My credentials for answering this is that I’m a pretty good healer and I use raw paleo diet as the foundation of my healing protocols, I’m also a raw paleo diet practitioner for 4 years (which isn’t much), and I am the network administrator of rawpaleodietforum.com.

“Hey everyone! I’m a student and chose the Paleo Diet for a research project. Turns out, I need to have 3 interviews for the project and don’t know anyone who is one the diet or is an expert. So, I really, really, really need your help here. If you could just answer these questions that I have, that would be great (please answer with at least a couple sentences if you can, I need more than just a few words). If you could specify if you’re an expert or someone who’s been on the diet, could you let me know? Two things that you don’t need to do but would be helpful. A name would be nice to have, but if you aren’t comfortable giving that out, I understand. Also, if you could email me the answers, just in case I had any follow-up questions, that would be amazing. If you aren’t comfortable with that either, simply replying here would suffice. Thank you so much! My email is xxx@gmail.com”

First, what exactly is the Paleo Diet? What’s the reasoning behind it?

The current dominant pharmaceutical medicine industrial complex backed food pyramid and its food industry backers is a total and complete failure.  The mass illness, including obesity, it has produced in a global scale is a total disaster.  The recommendation of COOKED, low fat, high carb and frankenfoods gmo and manufactured has ravaged the human race with such carnage for those who have eyes to see.

The raw paleo diet and its various forms are an attempt to mimic the dietary practices of the lost Garden of Eden during the mythical Golden Age before agriculture… whenever that was… and how many human civilization reboots we humans had experienced, we do not know.  Paleo diet, specifically raw paleo diet, just works… to heal people from supposedly incurable diseases… showing that the human body is a self healing machine when given the right conditions of food and lifestyle.

What foods can you eat, and which ones do you stay away from?

The guideline is think about Adam and Eve or the original humans without agricultural technology in the garden of eden.  It is easy to make a thought experiment and see that original humans ate what was very easy to acquire and filling and balancing.  Say a tribe will walk along the sea shore or river banks and gather abundant aquatic life whether animal or plants… for example: dugongs, clams, oysters, crabs, shrimps, fish, turtles, dodo birds, seals or whatever equivalent animal life they had at that time… plus various sea weeds and sea plants.

On terrestrial ground, the original humans may have had access to abundant nutritious fruit ripe in season and every month, there is a new season of some other fruit… such as durians, jack fruits, mangos, star apples, apples, oranges, coconuts, mushrooms, edible raw vegetables, edible raw root crops… or whatever equivalent items they had at that time.

Also on terrestrial ground, the original humans may have set traps or scared off cliffs their favorite land animals such as the ones they drew in caves such as horses, ox, buffalo, elk, deer, bear, python, elephant, grubs, insects, worms etc… or whatever was available during their time.

How difficult was it to stick to this diet?

Easy for me.  I had every incentive because I had come from an allegedly incurable illness in 2005-2006 (eczema).  I was well externally, but internally, I still formed liver / gall bladder stones which are expelled during liver flushes.  I wanted an end to liver stone formation and found it in completely raw food.  I experimented to no end until I found what raw food was sustainable.  Raw vegan malnourished me, raw fruitarian malnourished me, I stumbled onto raw paleo diets and that worked immensely well.  I’m so much healthier today than at point in my life… I’m not a fool to give up something this good.  It’s all about results.

Have you ever strayed from the diet for a day, or a meal?

Yes of course, I try to experiment at times.  I did 1 month of cooked meat paleo diet and that was a disaster.  Raw meat is absolutely superior to cooked meat.

I’m a modern human needing to socialize with other people and I will sacrifice a meal to broker a business deal.

Does the diet work for everyone?

In my healing experience, YES!  Raw paleo diet can be used as a temporary healing treatment.

Long term raw paleo diet is something else. It depends on how willing they are to sacrifice their social lives, how much commitment to change they have, if they are in control of the food shopping, if they have enough money.

How expensive is the diet?

Very very expensive.  But on the other hand, I have absolutely no use for medical doctors unless I’ve got trauma accidents like getting stabbed, shot or in a car accident.  Real food is expensive.  Not only in dollars, but also sourcing takes time.

How long have you been on the diet? What differences did you notice?

4 years and 3 months.  I look good, I look younger than my age (42 looking 32), I feel good, I’m no longer sick, I’ve stopped worrying about my health, I have zero medical expenses, I take zero supplements, I’m happy.

How do you encourage yourself, or others, to stick to, or join, the diet?

I’m at the healthiest point in my life ever, compared to my 30s and 20s and teens and pre teens… I have all the encouragement through remembering my old sick self.  I sometimes view my old sick of eczema pictures at eczemacure.info and my obese pictures in my 30s.

Join and socialize in our global forum www.rawpaleodietforum.com , humans are social animals and this forum is an immense treasure for everyone.

Does this diet work if you want to gain muscle? Or is it only for losing weight?

To lose weight, I just don’t eat fattening food such as high fattening types of carbs foods, and do not eat as often.  Say eat only 2x a day.

How much exercise, if any, is recommended?

My primary form of exercise is wet marketing almost every other day for my family.  If I wanted adonis type muscles, I could commit myself to a program such as internal martial arts, movenat or a sport.  But that is not my current focus right now.

How much longer does one live while on this diet?

I would like to go for the record of longest lived humans.  Minimum 120 years old.  Possibly 200 years old.

What kinds of side effects, if any, are there? Have you had any?

No bad side effects.

What are the benefits of the diet?

You can use raw paleo diets to get well from medically incurable diseases.

You can achieve health heights you never even imagined you could.

Have you tried any other diets? What makes this diet the best one?

Plenty.  SAD, cooked vegetarian, atkins, raw vegan, raw fruitarian, then various forms of raw paleo diets.  This is the last one I tried.  Raw paleo diet / cooked paleo diet is VAST.  There is a VAST amount of permutations and ratios and combinations you can experiment with within the paradigm.  And I have used these various permutations for healing many people.

See the various forms of raw paleo diets at http://www.rawpaleodietforum.com

Raw paleo diet and its various practices is the best because it can heal people of incurable diseases short term.  It can also be used long term to achieve health heights you never thought possible with yourself.

Some people say this is a fad diet, what would you say to them?

Raw paleo diets is something our human species may have evolved from.  Hundreds of thousands or millions of years vs the drop in the bucket of time of civilization… is a no brainer comparison for those who care to think it over.

Can you eat more if you exercise?

Of course if you labor more, you need to eat more.

If cavemen died young, why should we eat like them?

The assumption is false.  Which cavemen are you talking about?

I look at myself as one who has discovered the fountain of youth and healing.  We in the raw paleo diet forum community are those wise old hermits trading stories and connecting due to the power of the internet.  See this remarkable fellow http://en.wikipedia.org/wiki/Li_Ching-Yuen. Each one of us in the raw paleo diet forum community seems to be an aspiring Li Ching Yuen and we have the potential to live as full a life as he did.

We are vastly smarter and more modern and more high tech than those old uneducated “cavemen.”

Don’t we need fiber in our diets?

Not in the food industry and western medical definition.  Look up the fiber myth http://www.gutsense.org/reports/myth.html

Shouldn’t we eat raw meat, instead of cooked meat, like our ancestors?

Should you take supplements with this diet?

Only if you cannot source certain foods or conditions in your area.  Some members report needing vitamin D supplements during winter.

How much fat should be in our diets?

As much RAW FAT as your body will tell you to stop.  There is a balance between instinct and logic and observed results.

Is there a difference in any part of the diet based on gender?

All of us have varying needs so each person’s requirements and food compatibility is different.

From a list of most important to least important, which foods/drinks do you cut out?

I stick to raw paleo diet foods as defined about as things I can eat raw and unprocessed. Healthy wild is king.  Everything else is out. No GMO, no intensively farmed stuff.

What else can you tell me about the diet?

It is important you stress that the diet I promote and eat is a RAW PALEO DIET whose principles may be vastly different from cooked paleo diets.  Join http://www.rawpaleodietforum.com

Here’s one: Psoriasis for 20+ years (Chinese in Hong Kong)

He was also featured in our national TV with me shown eating raw meat as well.

Here’s a 5th one: Chronic Fatigue, Depression, Sick all the time (Caucasian American)

I sincerely hope this helps you in your homework.