This is exactly the mass disinformation campaign I am disgusted at raw vegans with. The initial salvo of raw veganism co-opted the concept of raw-foodism such that massive numbers of people equate raw foodism with raw veganism which is ABSOLUTELY AND TOTALLY WRONG.

The correct concept of RAW FOODISM is everything raw, everything from raw fruits, raw vegetables and most importantly and eventually majority of your food is RAW MEAT.

My reply to such a mis-conception about raw foodism is this:

If you think about it, the Japanese people eat raw fish sashimi / raw octopus / raw squid / raw fish eggs and other sashimi (raw beef and raw horse) every single day.

That is 127 million Japanese people eating sashimi every single day.

And even before I got sick I grew up eating in Japanese restaurants once a month chowing down sashimi because it just tasted good.

When I did my detoxes in 2006 I became eczema symptom free. But I was just borderline healthy. I still had liver stones even at my 20th liver flush. So I decided to experiment with raw vegan, raw fruitarian and a 14 day orange juice fast.

All my liver stones disappeared but raw vegan and raw fruitarian made me malnourished.

In January 2008 I discovered Wai Diet. It was easy for me. Raw fruits plus raw fish sashimi and raw eggs were very easy because I liked those anyway and fresh fish is plentiful daily in our wet markets.

I found instant health. I was no longer borderline healthy, my health was zooming up. Then I got bored with fish sashimi and read Aajonus Vonderplanitz of Primal Diet fame. Raw dairy did not work for me, but land animals red meat and land animal raw fat worked really well and tasted really good for me.

So I found the helpful guys at raw paleo forum which was set up by All Experts guru Geoff Purcell and Craig Bates.

My health has gone way way up up up with a raw paleo diet of raw red meats, raw fish, raw fruits. Up to heights I never dreamed possible. And it’s still going up. It’s just been 2.5 years and achieving health this good is sometimes unbelievable. I’m 40 but I feel and look much better than when I was 30.

Raw meat and raw fat was what I’ve been missing all my life. I may seem weird but I am cured and healthy for the past 2-1/2 years because of raw meat.

The Japanese people are no strangers to you I suppose? They are the chinky eyed asian technological super power which gave us Toyota Vehicles, Komatsu Heavy Equipment, Sony Television and Playstation, and children’s anime cartoons like Pokemon et al.

From Wikipedia on Sashimi:

Sashimi (Japanese: 刺身, pronounced [saɕimiꜜ]; English: /səˈʃiːmiː/) is a Japanese delicacy. It primarily consists of very fresh raw seafood, sliced into thin pieces and served with only a dipping sauce (soy sauce with wasabi paste or other condiments such as grated fresh ginger, or ponzu), depending on the fish, and simple garnishes such as shiso and shredded daikon radish. Dimensions vary depending on the type of item and chef, but are typically about 2.5 cm (1″) wide by 4 cm (1.5″) long by 0.5 cm (0.2″) thick.

Plus pictures from Wikipedia: 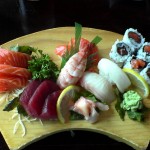 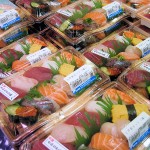 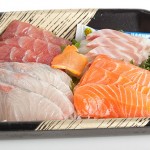 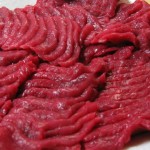 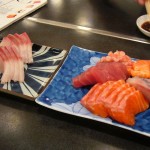 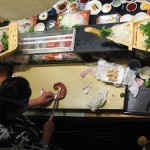 So have you come to your senses now? Have you been de-shocked? Culturally exposed? 127 million raw meat eaters as human as you and I grew up on eating raw meat for as far as they can remember. Maybe in your culture you had forgotten that your own ancestors grew up on raw meat. It’s time you re-thought your food paradigms.