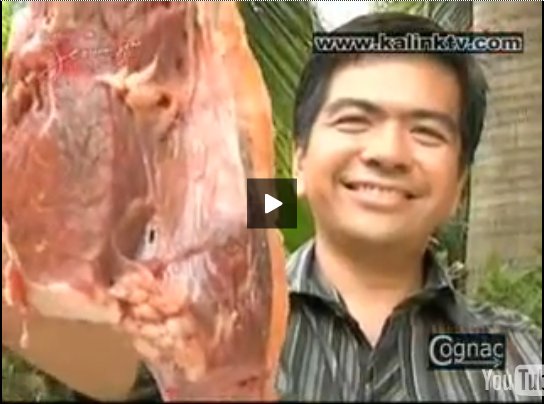 And continues with where it shows my plumber Mang Ben who I taught how to cure himself of terminal liver cancer. They only showed him eating raw pork, and didn’t mention he did colon cleansing, kidney cleansing and egg yolk liver flushing. Note: I did not teach him to eat raw pork, I teach beef. But people are free to do what they want. And the program continues on to 2 patients of the great healer my friend Vander Gaditano who are shown drinking freshly killed goat liver juice.

Language is in Tagalog… but you get the drift and see the Paleo Diet introduced. After each raw meat eating testimonial a doctor will say his bit… of course… against raw meat eating.

I had a lab test and the lab said it seems my WBC is high at 15 when their standard is 5-10… and allegedly I had an infection… ha ha… And I say, I’m not interested in blood tests. Whatever I get must be what’s just right.

I had absolutely “normal” blood test results when I was obese, with acne, with eczema, got sick of viral illnesses, mitral valve prolapse, colds, flu, coughs, soar throat, etc.

And I drank a glass of fresh raw kamote tops juice in the morning of that blood test thinking they were going to draw a big syringe of blood.

And that was a stressful week for me when I had just hired 2 new people and 2 servers from one of my web hosting suppliers had to rush migrate due to hardware failures and they failed to transition some domain DNS settings automatically causing email loss to a handful of customers and they failed to restore a most important customer database.

There’s also the factor where why should a raw paleo diet practitioner have a “normal” blood test when his diet and lifestyle are so different from the current average.

Blood tests are good for E.R. cases, but not so for diseases. I have healed many people and not once did I ask for blood tests. There are far better telling symptoms.

Of course the western medical docs will never agree with me on anything. Let’s put it this way. I have saved the lives of my friends and family from their admitted incompetence and hopelessness… several times… my brother, my sons, my grandpa, my grandma, my best friend.  And I never once asked for blood tests.

The other 3 healers refused to appear for this episode.  They are professionals with businesses and they would rather not be persecuted.  Since I’m just an advocate, I don’t mind.  Learn more about raw paleo diets.  Join the raw paleo diet forum at http://rawpaleodietforum.com.