For the sake of our non Tagalog speaking readers, I will write down a rough narrative of what Jenny just said.

Jenny first says that young papaya leaves tea was taught to her by a friend when she was almost dying from three months of a deadly form of bronchitis. Jenny says she wasted all her money on various methods of healing, she almost died and in fact felt at times she was dead. Then a friend taught her this FREE remedy. Papaya leaves tea. 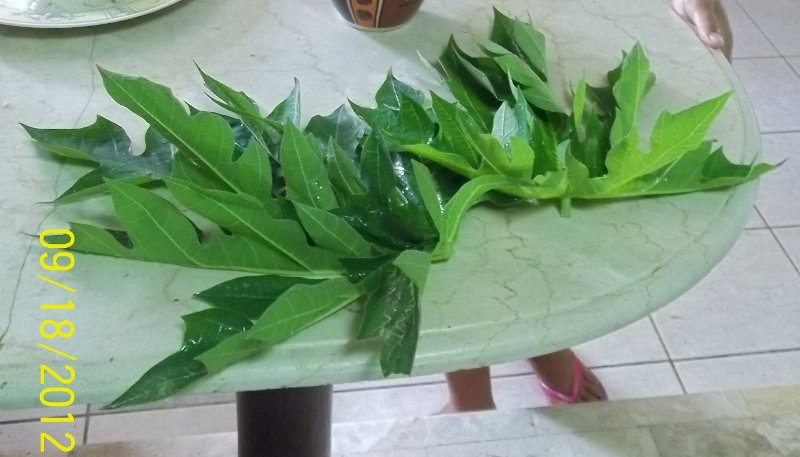 To convince her of its effectiveness, the friend told her that she knew of this papaya leaves tea from a testimony of a relative who got well from being almost dead of tuberculosis at the point he was already spitting blood and gaunt skin and bones. Daily intake of young papaya leaves tea 3x a day for 1 month led to complete tuberculosis recovery! Fantastic!

Jenny made her own papaya leaves tea and in 1 day, she felt stirred to come to life and felt immediate healing. Taking the papaya leaves tea 3x a day for 5 straight days and she found herself COMPLETELY well from a deathly bronchitis which she suffered for some 3 months. She felt as if her lungs, her chest, her back were being scraped clean. She was able to expectorate her phlegm, stringy phlegm she pulled out long white sticky threads.

She was demonstrating and making this tea for us as me and 2 boys had colds and the boys phlegm from indoor house pollution of molds due to the recent house flooding coupled with poor air circulation in that house.

I had to taste this papaya leaves tea myself before giving any to my boys. It tasted like papaya seeds. That is when you chew on papaya seeds. For adults, this kind of tea is bearable in bitterness. For children, maybe they would need some sweet chaser.

The recipe is 1 young papaya leaf, freshly picked. Bunch in a big cup, cut if necessary. Pour in just boiled water, steep and drink when the tea has cooled enough to be drunk. Recipe: 1 young papaya leave to 1 big cup of water. Take 3x a day. Known to Jenny for lung cleansing of bronchitis full of phlegm and tuberculosis.

Lesson learned. Plant more papaya trees in your yard or empty neighboring lots. You never know when you will need them.

For me, this is classic lung cleansing. Very simple. Very easy.