Laundry woman Gemma 48 given birth to 5 children – ligated, 2 sons had the same crippling pain illness and 1 son died before he reached 2 years old. Gemma thought she would suffer the same death by crippling pain. Luckily her bosses were healers: The Physical Kind and the Meta Physical Kind… winning combination.

First 2 days she went to the hospital and was given drugs for spasm relief and pain relief. Then For the next 2 mornings I treated her with magnetic pulsers and latundan bananas, read part 1 click here. Then for the next 2 days she shopped around for traditional hilot healers… and having given up on them came to her bosses for real healing. I was alarmed the past 2 days we could not get a hold of her because I knew exactly how to heal her, but she was out and out elsewhere. Did she take my joke seriously that I should be paid double the amount she had been spending for her useless docs and hilots? Her husband, my driver said she was “nahihiya”, shy that I had to take care of her when she sees me busy running a full time business.

This is Gemma, after 2 days of holistic healing therapies. Holistic means totality of everything possible to cram into the patient in such a short time. Change of environment, better diet, special foods, electromagnetic correction devices, detox protocols, spiritual / metaphysical healing.

It worked in 2 whole days sleeping in our home, patient healed. Now it is your turn to understand this SCIENCE, the scientific background of how this kind of healing works. We have done this many times at home, we are already at the ENGINEERING stage of this kind of healing method. Our SCIENCE is solid, and we apply engineering principles to heal people on a reliable, consistently successful basis. Gemma was easily encouraged because the rest of the help we had already helped heal in their times of crisis. Her husband, my driver had UTI, high blood pressure, kidney pain, gout and erectile dysfunction for 4 years… now strong and cured. My in laws’ driver who was once dying of pneumonia and a frozen shoulder, we cured. The long time maid seeing how our healing principles worked cured her own father in the province when he had a heart attack.

In the first two mornings of healing tries, I had deduced that Gemma had nutritional deficiencies and detox challenges. The instant stopping of pain due to electrical devices with magnetic pulsers and pyroenergen and quantumin minerals plus told me she had dirty blood problems. The successful one time use of cayenne tincture told me she had cirulation problems. That her pain would move from one part to another shows dirty blood looking for places to dump that dirt. The electrical, magnetic and energy healing stuff were there to assist, relieve pain, enhance and speed up healing, but we needed to cleanse her and pump nutrition at the same time.

I will now discuss what we did in this stage of healing. 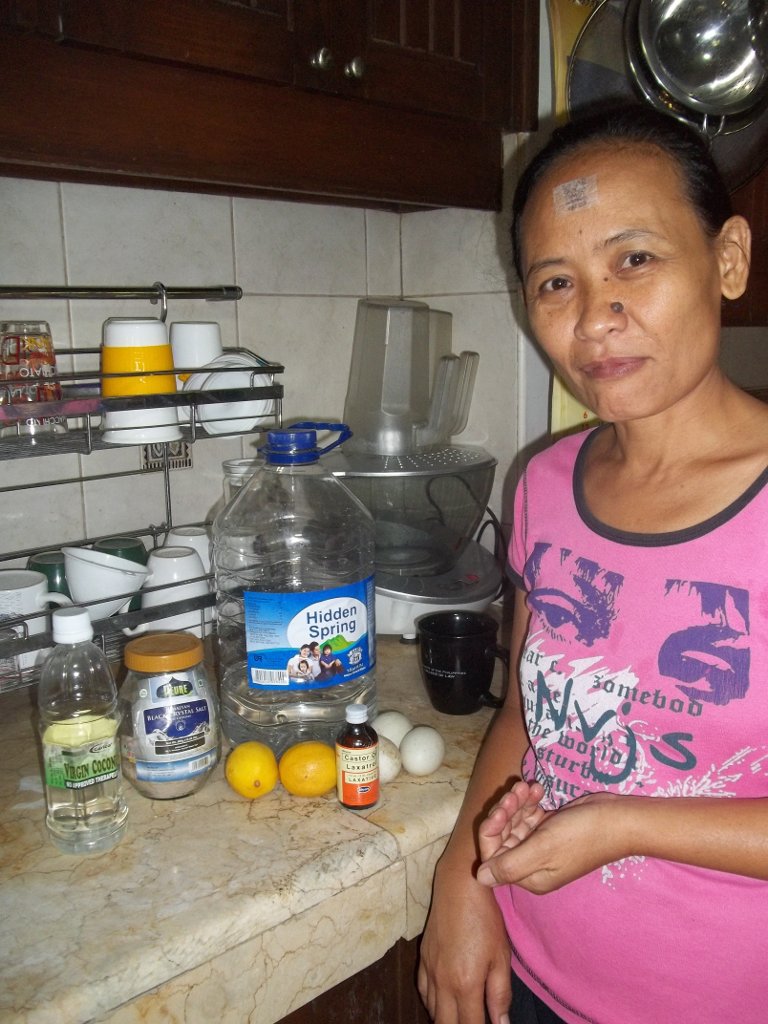 For diet, I asked her to eat exclusively at our home. She’s poor and she does not know how to conserve her money with cheap but nutritious food. She’s a rice addict (most Filipinos are) so give her that. We have fruits. We have vegetables. I gave her a tablespoon of apple cider vinegar in hidden springs mineral water once a day. She ate ocean fish and pork at home. I gave her black salt (high in sulfur) to eat in her hand while she drank mineral water. One time someone cooked pansit and I forbade that junk food from her. Who knows what’s in “pansit”. A diet and detox method at the same time of lemons + raw duck egg yolks + virgin coconut oil was given to her for 2 morning when she woke up.

I told Gemma to stop buying commercial cooking oil and buy pork fat instead to make into her own cooking oil, in fact stop frying her food for now. I also told her to stop eating monggo beans and stop all wheat. Stop eating chemical mix fake juices. And stop using “magic poison” on her food. Use real salt, not salty substitutes that actually lack the nutrition that should come from salt. I gave her both black Himalayan salt and pink Himalayan salt.

For detox protocols we had a running cycle of:

And for electromagnetic healing:

The castor oil colon cleanse allowed her to poop foul smelling poop. She is to do this for 5 straight afternoons every 2 pm. She has to dig into her guts and poop them dirt out.

The kidney cleanse using avocado leaves tea every day for 5 days as well along with the colon cleanse.

Mother in law did her prayers and oracion and blowing on Gemma that she felt “kilabot”, raised the hairs on her body and after that the last 1% of pain all went away. She was also given a “tapal” a piece of tape with writings of prayers and taped on her forehead.

Her testimony is in Tagalog / Filipino in You Tube.  See below.